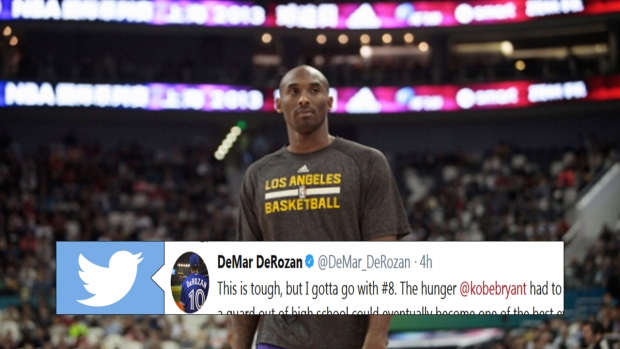 December 18, 2017, is a big day for Kobe Bryant, the Los Angeles Lakers, and basketball fans around the world.

Ahead of the Lakers’ tilt with the Golden State Warriors on Monday night, the franchise is going to honour Kobe Bryant by retiring both his No. 8 and No. 24 in a special pre-game ceremony.

#KobeBryant will have both of his jerseys retired tonight #ko8e24 🐐

The tweet led to opinions from fans around the world, including Toronto Raptors guard DeMar DeRozan.

This is tough, but I gotta go with #8. The hunger @kobebryant had to prove that a guard out of high school could eventually become one of the best ever is something that inspired me in all aspects of life. It inspired an entire generation. #8v24 @nikebasketball https://t.co/tILLZIerij

The Compton, California native got to watch Bryant closely during the early years of his NBA career and provided a very solid answer as to why he would go with the No. 8 Kobe over No. 24 Kobe, especially since the career numbers between the two are almost identical.

Two numbers. Both Hall of Fame-worthy.

Which Kobe are you going with?