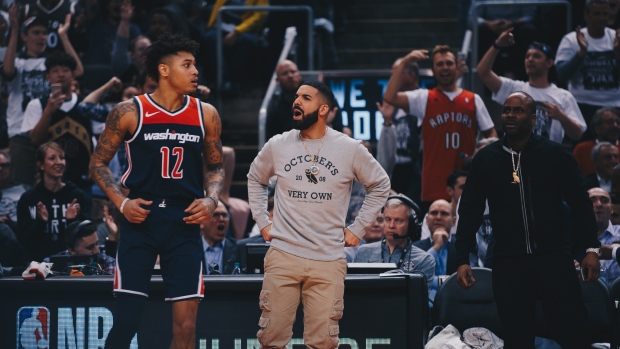 It’s not the most entertaining rivalry in sports, but there’s definitely some hate between the Toronto Raptors and the Washington Wizards.

The Raptors fans came out in full force for the first two games of the postseason and showed the rest of the NBA why the Raptors were so good on their home court during the regular season, and one fan who made his presence felt during both games was Drake from his courtside seat.

Drizzy always gets into it when he shows up to home games, so Game 2 wasn’t any different. He got into John Wall’s head before the series even started and kept it going on Tuesday night by getting into another Wizards player’s head.

The Canadian rapper appeared to call Kelly Oubre Jr. a “bum” as he ran past his courtside seat, but the Wizards’ forward didn’t take it too personally and even said that him and Drake are boys during the summer.

Kelly Oubre Jr. heard Drake call him a "bum" during Game 2. "That’s my guy though. I see him in the summer time... we pretty much run the streets of LA together, on the A-list tip, not in the hood way. He is a great rapper.” pic.twitter.com/WWPchLCJAl

We’re not sure when their friendship started, but Rob Perez managed to dig up one of Oubre’s old tweets from nearly seven years ago where he took a shot at Drake.

omg he went straight to the locker room and deleted the tweethttps://t.co/YtqrtrSuzo pic.twitter.com/WipefPzUAX

Oubre’s original tweet about Drake not having any swag has been deleted, so we’re going to guess that this was just some friendly banter between Drake and Oubre. However, if Drake really does think Oubre’s a bum and was getting him back for the old tweet, then the Wizards’ forward looks pretty ridiculous for saying they’re boys and run LA during the summer in his post-game interview.