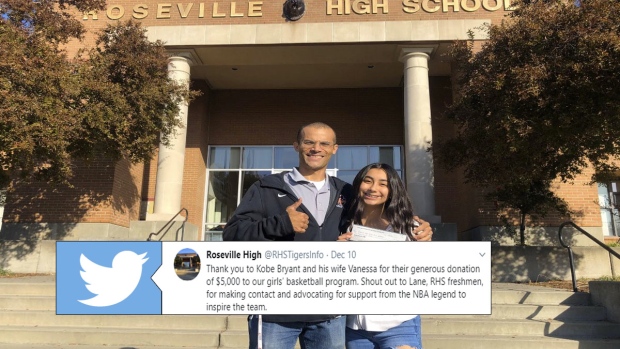 Kobe Bryant is one of the greatest players to ever play the game and played a huge role in helping to build the NBA’s brand, and even though he’s no longer playing he’s still finding ways to inspire the next generation of basketball players.

Earlier this week, Kobe and his wife, Vanessa, made a $5,000 donation to the Roseville High girls’ basketball program.

Thank you to Kobe Bryant and his wife Vanessa for their generous donation of $5,000 to our girls’ basketball program. Shout out to Lane, RHS freshmen, for making contact and advocating for support from the NBA legend to inspire the team. pic.twitter.com/0TLbRXJf2p

The school’s Twitter account mentioned that a freshman student by the name of Lane reached out to Bryant for some support and the 5-time NBA champion stepped up pretty quickly.

It’s awesome to see Bryant dedicated to growing the game even though he’s no longer playing in the NBA. ​