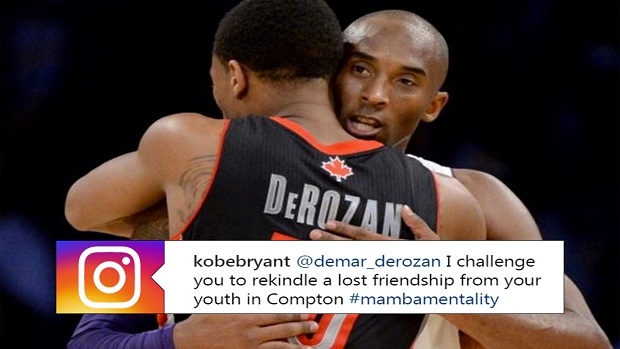 Kobe Bryant turned 39-years-old on Wednesday and it looked like the five-time NBA champion had a pretty good day.

A marvel superhero bday cake to go with an Epic Collection signed copy from @therealstanlee the real goat. Great cake and great gift from @vanessabryant and our princesses Thank you all for the birthday wishes it's been a blessed day #39 #timehaswings #virgo

Perfect way to end my birthday is to take in the timeless performance of #Hamilton with my family. The cast was UNREAL! 👏

On Thursday, the 18-time NBA All-Star decided to start his day a little differently than he usually does as he took to Instagram to reach out to four different athletes, as well as Kendrick Lamar, to challenge them to do something that changes them and the community around them.

First up was the newest member of the Cleveland Cavaliers Isaiah Thomas, who was challenged by Bryant to make the All-NBA First Team next season.

Seconds later it was Toronto Raptors guard DeMar DeRozan who got the call from Bryant and he was asked to rekindle a lost friendship from his youth in his hometown of Compton, California.

Bryant switched things up on the third Instagram post by challenging Kendrick Lamar instead of a professional athlete. Sticking in Compton, Bryant asked the rapper to help revolutionize the music program at Centennial High School.

From the hardwood to the stage to the track, next up on Bryant’s challenge list was American track and field sprinter and 2012 Olympic champion Allyson Felix.  The two-time Olympic silver medalist was challenged by the Lakers legend to coach at the upcoming Special Olympics.

Last but not least, Richard Sherman. The Seattle Seahawks cornerback has been very vocal and one of the most dominant cornerbacks in the NFL since he came into the league in 2011 and now Bryant wants him to go out and break the Seahawks’ single-season interception record (10) next season.

We’re not sure what sparked Bryant to go on this posting spree on Thursday morning, but capped it off with this message.