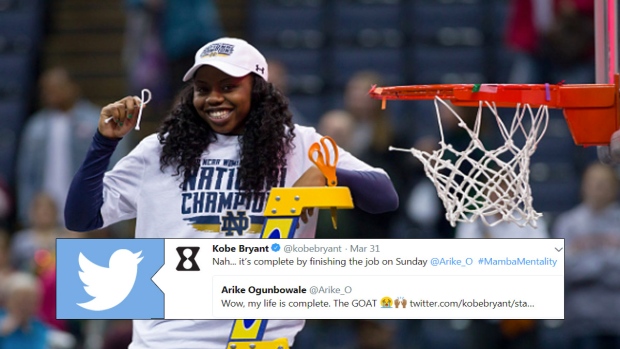 Arike Ogunbowale is the biggest star on campus at the University Of Notre Dame right now after her outstanding weekend at this year’s March Madness tournament. The junior guard hit a buzzer-beater in overtime in the Final Four game on Friday night to shock UConn, and then she did it again on Sunday night to capture the championship for the Fighting Irish.

All eyes were on Ogunbowale after she hit the buzzer-beater in the game that handed the Huskies their first loss of the year, but there was a specific message she received from an NBA legend that helped motivate her ahead of her team’s most important game of the year.

Not only did she receive Kobe Bryant's message, but she delivered in the biggest and best way possible.

#NotreDame wins the Women's National Championship with a thrilling game-sealing shot from Arike Ogunbowale - her second of the #FinalFour! (via @ncaawbb)

This all started following her game-winning shot against UConn when Ogunbowale admit during her post-game interview that she was just trying to channel her inner Mamba Mentality. She did not go unheard as Kobe not only congratulated her on her big shot and win, but he gave her the Mamba Mentality seal of approval.

It’s the second time the Notre Dame women’s basketball team has captured the title, with the first one coming back in 2001, while Mississippi State has now lost in the finals in back-to-back seasons and are still searching for their first title.