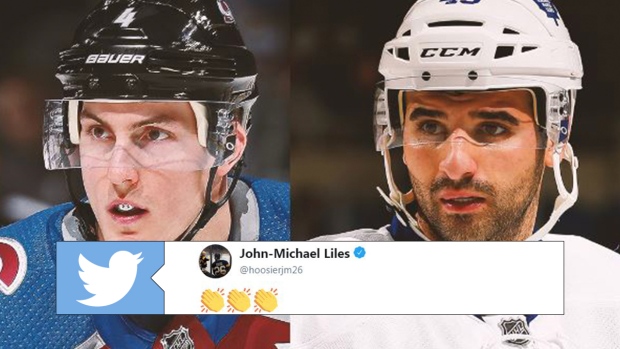 July 1 was a very busy day for leagues around the NHL as nearly 100 players signed new deals in the first six hours of the official signing period, but the biggest shock of all came shortly after when the Toronto Maple Leafs and the Colorado Avalanche made a blockbuster deal that sent Nazem Kadri to the Avalanche and Tyson Barrie to Toronto.

The Toronto Maple Leafs have acquired Tyson Barrie, Alex Kerfoot and a 2020 6th round pick from the Colorado Avalanche in exchange for Nazem Kadri, Calle Rosen and a 2020 3rd round pick.

The trade news came out of nowhere as Leafs fans have been completely focused on Mitch Marner’s new deal and when that’s going to get done, so there were plenty of mixed reactions from fans as they landed a top defenceman but it was in exchange for a long-time Maple Leaf.

Alex Kerfoot and Tyson Barrie is a really good get for Nazem Kadri and spare parts. Kerfoot is a good, young forward who can play in the middle six and Barrie is a good top 4 offensive defenceman. Kadri was a good centre and I’ll miss him, but this is a win for the Leafs.

Nazem Kadri was my first Leafs jersey. This one is going to sting for a while buttttt loveeee Tyson Barrie as part of this team.

Objectively, this is an amazing trade. I don't know how Kyle Dubas does it. You have to give in order to get, but the Leafs definitely got so much more out of it.

Emotionally, Nazem Kadri has always been one of my favorite guys, on and off the ice. Yeah, I'm sad.

Nazem Kadri had to go (after 2 disastrous appearances in the playoffs) + so glad he's gone! #LeafsForever #NHL

Nazem Kadri had been my favourite Leaf since he was drafted. This is a bittersweet trade, good for the team but still breaks my heart. I wish him nothing but luck in Colorado. See you in the finals Avalanche. https://t.co/LUYcmtDEI0

It’s definitely tough for Leafs fans to see Kadri go in the deal, but they landed Tyson Barrie in the deal and they’ve been in serious need of a defence.

Despite how anyone may feel about him, I am going to miss Nazem Kadri and his work ethic and dedication to this team. Good luck Naz, I hope you do great 😭

Nazem Kadri has been traded from the Maple Leafs.
Waiting for Leafs nation to explodeeeee pic.twitter.com/yzjHyzBqit

He skirted the line of dirty too often and failed to use his head at times, but the dude wore his heart and his sleeve and always gave it his all. pic.twitter.com/Mpho5waCGA