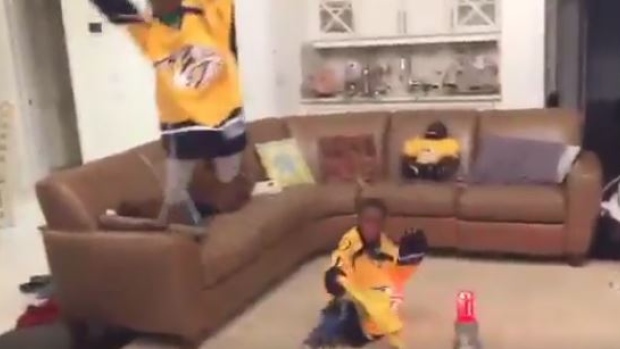 The Nashville Predators put an end to the Chicago Blackhawks’ season on Thursday night by completing the sweep with a 4-1 victory.

The #Predators completed the sweep of the #Blackhawks with a 4-1 win. . They await the winner of Minnesota/St. Louis in the 2nd Round.

While most people took the Blackhawks to escape this round with ease, it was actually the Predators who made it look easy and ended up looking like the No. 1 seed in the matchup.

With it being the first sweep in franchise history, you can bet that the Preds faithful were pretty fired up about the massive victory.

I don't think we should take all the credit but I will say once @lukebryan and I put these hats on the @nhlpreds s… https://t.co/z9nTu71xDz pic.twitter.com/vrPj9toKyy

However, with the entire city going nuts due to the fact that their team just advanced to the second round of the NHL playoffs, no one seemed to be as excited about the sweep as P.K. Subban’s nephews were.

You can bet they’re ready for the second round to get underway. Subban even approved of the message and celebration.