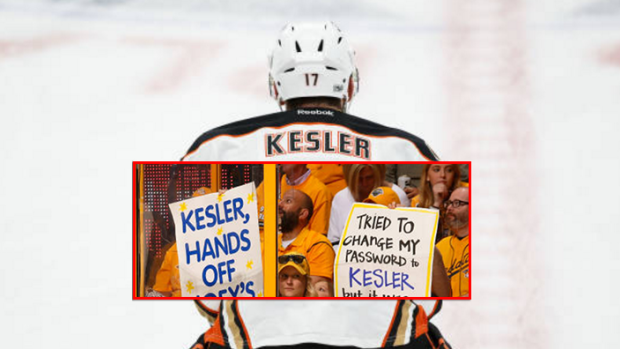 The Western Conference final between the Ducks and Predators has been entertaining on so many levels.

For starters, the hockey has been great, and although the Ducks have been outshot in every game of the series so far, every game has still been close.

Plus, the war of words off the ice is just as entertaining, and it adds to the action on the ice.

In case you don't know know what war of words we're talking about, we'll fill you in.

After Game 2, Ryan Johansen ripped Ryan Kesler apart for his style of play.  Kesler responded to the epic rant ahead of Game 3:

Ryan #Kesler and Ryan #Johansen are not friends.

Johansen and his Predators got the last laugh in Game 3, and so did these fans who ripped Kesler apart with these creative and NSFW signs.

The one NSFW sign is in response to what Kesler did to Johansen during Game 2 of the series.

All eyes will be on the two again Thursday night as Nashville looks to move one win away from their first Stanley Cup final berth.