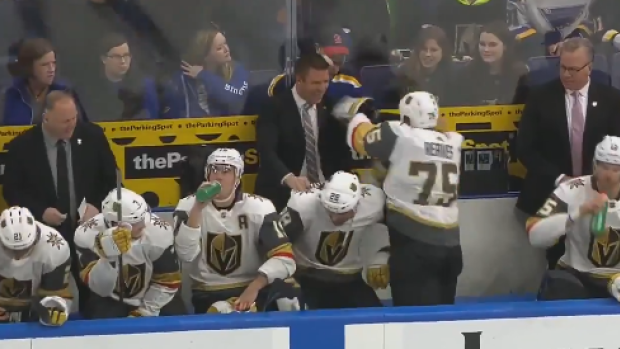 When you first watch and realize who's doing the charging, you might think for a second that Ryan Reaves' pre-game routine isn't actually a routine.

But when you see the faces on coaches and Reaves himself, you immediately understand that he's simply having some fun and punking those who are ready to pass rash judgement.

Reaves and the Golden Knights were in St. Louis on Monday night, and before puck drop, the Blues camera crew caught Reaves jabbing his stick at Golden Knights head coach Gerard Gallant and then grabbing assistant coach Ryan Craig.

A noted prankster, Reaves plays the role well, and like many enforcers before his time, he loves to bring a smile to the faces of his teammates, it's a pre-game interview, or at practice.

Never change, Reavo. Keep being an absolute beauty and never stop injecting your personality into a game that needs it desperately.

The pre-game fun came to a halting end, though, as the Golden Knights lost 3-1 to their divisional opponent, the St. Louis Blues.