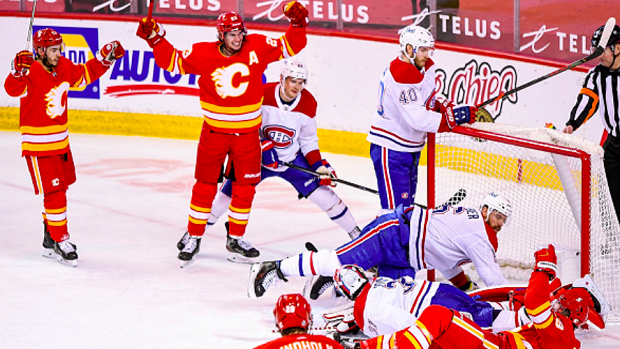 Sean Monahan entered Saturday’s contest against the Montreal Canadiens with just five goals on the season, but the 26-year-old potted two in the Calgary Flames’ 3-1 win, including the game-winning goal.

The first of the night for Monahan was a special one as it was the 200th goal of his career, and the first period marker put him on a list that includes some pretty great company.

Sean Monahan opened the scoring with his 200th goal while skating in his 567th career regular-season game. Among players to debut with the @NHLFlames franchise, he required the seventh-fewest contests to reach the mark. #NHLStats pic.twitter.com/izj00vEzbT

It was the 567th career regular season game for the Brampton, Ontario native and the first goal of the night made him the 7th fastest Flames player to hit the 200-goal mark with the franchise. It wasn't the only list he climbed up on Saturday as his game-winning goal tied him with Joe Nieuwendyk for third-most game-winning goals by a player in Flames franchise history.

Thanks his 2nd of 2 on the night in a 3-1 win over the Canadiens, Sean Monahan has tied Joe Nieuwendyk for the 3rd most career (regular season) game winning goals by a player in @NHLFlames franchise history (43). He now ranks behind only Jarome Iginla (83) and Theoren Fleury (53) pic.twitter.com/zBxfy3f4UE

The two-point performance now gives Monahan three goals and five points over his past five games and the Flames have now won two straight for the first time in a month.