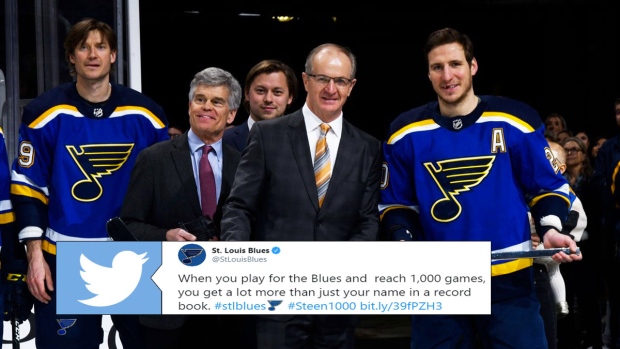 The Toronto Maple Leafs traded Alexander Steen, along with Carlo Colaiacovo, to the St. Louis Blues on November 24, 2008, and the Winnipeg, Manitoba native has called St. Louis home ever since.

Last week, the 35-year-old suited up for his 1,000th career game and on Thursday night the Blues celebrated Steen’s recent accomplishment with a special pregame ceremony.

After a beautiful video tribute, Steen joined his family and teammates on the ice, where he received a few gifts.

So proud to call you one of our own, @Steener20. #stlblues #Steen1000 pic.twitter.com/xtrnHPQdQx

Steen received an incredible custom piece of art, as well as a Rolex, and a special plaque and stick from his team and the NHL.

When you play for the Blues and reach 1,000 games, you get a lot more than just your name in a record book. #stlblues #Steen1000 https://t.co/iUj9jp6YZ1 pic.twitter.com/KIHGsLK4V5

They weren’t done there, though, as they also got some of Steen’s former teammates and actor Jon Hamm, who hails from St. Louis, to share a special message with the Stanley Cup champion.

Some of Alexander Steen's good friends and former teammates had messages for him for #Steen1000! #stlblues pic.twitter.com/y5lXZlj1PH

Steen entered Thursday’s contest with 1,001 regular season games under his belt, playing 748 with the Blues and 253 with the Maple Leafs, and has 243 career goals and 620 career points in that span.