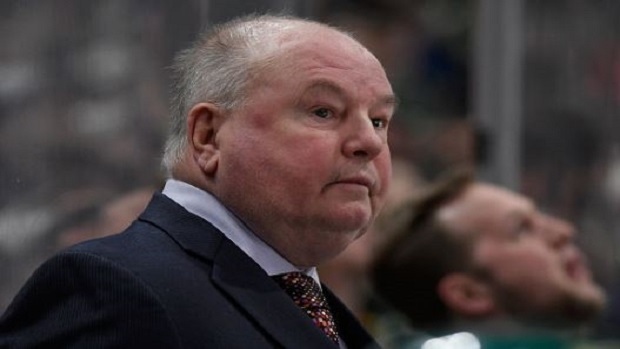 Bruce Boudreau picked the wrong night to make an error on his lineup sheet.

The Minnesota Wild were in Pittsburgh on Tuesday night and it also happened to be the night Sidney Crosby returned to the Penguins lineup. Thanks to an error made by the Wild head coach while he was filling out his lineup, the visitors were forced to play the game with just five defencemen.

#mnwild will be down a defenseman tonight. Greg Pateryn, expected to play, is listed as a scratch on the game sheet. Delay before opening puck drop was because officials booted Pateryn from the bench.

Donato was going to be scratched, but is listed active. Eligible to play now.

Boudreau listed Greg Pateryn as a healthy scratch on the lineup card instead of putting the 29-year-old into his lineup and he ended up getting kicked off the bench by the officials before the opening faceoff.

Bruce Boudreau off to a flying start here, illegally dressing D-man Greg Pateryn even though he'd been listed as a scratch. Pateryn's sent off, and the Wild are stuck playing with 5 D tonight. Hilarious. #DKPS #Penguins #LetsGoPens #MNWild #MINvsPIT

There’s something you don’t see all the time, or ever.

Start of the game has been delayed because the Wild had an illegal player apparently. Greg Pateryn was listed as a scratch but was on the bench. Now he has gone down the tunnel the Wild locker room.

It was a bad night to be short a defenceman as the Wild were blown out 7-3.