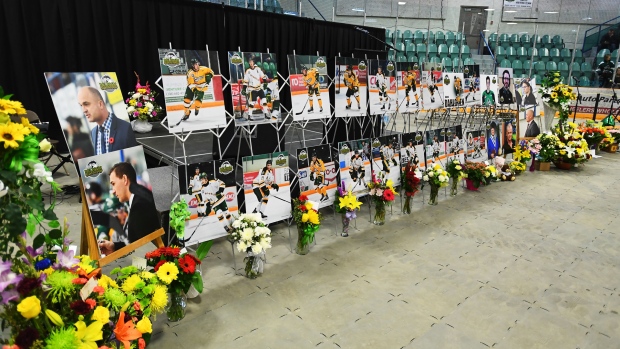 As the hockey world continues to mourn the tragic deaths of 15 people involved in the Humboldt Broncos bus crash, members of the hockey community are rallying up to show their continued support of the victims and their families.

Multiple “hockey moms” in British Columbia have teamed up to raise awareness throughout the sport to come together and wear a hockey or sports jersey on Thursday, April 12th as a tribute.

In an interview with CTV, Langley, B.C., resident Jennifer Pinch, who's helping organize the tribute, explained how the tragedy hit too close to home with her 16-year-old potentially playing for Junior A clubs like the Broncos in the near future.

“It's my son, it's his friends, it's the community," she told CTV News. "We have all been there. We are all them."

The idea is for hockey players is to take photo with the jersey on, and then share it on social media platforms with the hashtag #jerseysforhumboldt, much like the #putyoursticksout movement.

My brother Ed was and is a Wheat King. I was and am a Crusader. We will wear our old jerseys April 12th to honour and respect Humboldt. #prayersforhumboldt #jerseysforhumboldt pic.twitter.com/UetqKXa9Fx

Here’s the official details of the event, courtesy of the event’s page hosted by Teressa Bramley.

“We want to show our support to the families of Humboldt Broncos. They are currently going through a tragedy that no family or community should experience. As hockey families we are here for you!

On Thursday April 12, 2018 we will wear our Jerseys to show our support and send our love. Media coverage has been amazing as well as the support received from across North America and the World. Thank you! See the news and radio links below!

Please join us in supporting these families. Wear your Jersey to school, work, anywhere you go! ❤️ http://instagram.com/jerseysforhumboldt”

The event has over 4,500 confirmed participants, as of Tuesday night. Organizers of the event will also try to add a fundraising component to the worldwide event, with proceeds going to the GoFundMe campaign that has raised just under $8 million.