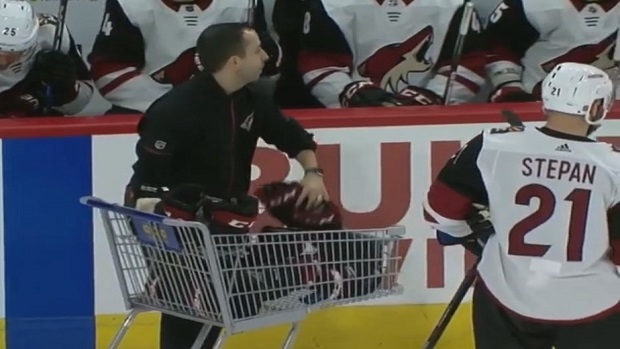 The Arizona Coyotes got off to one of the worst starts in NHL history this season as they started the year with just two wins in their first 17 games. However, the young team has managed to turn things around in the second half of the season and currently own a 13-6-2 record over their past 21 games.

The Coyotes are currently a third of the way through a six-game road trip and are coming off a 6-5 loss to the Carolina Hurricanes on Thursday night. Since the team only visits Carolina once a year they aren’t too familiar with PNC Arena and they found out one of the downfalls of being a visitor in the arena on Thursday.

Do what you gotta do 😂

Since the team’s room is on the other side of the ice the players can’t just head down the tunnel to go to the room like they would have to at most NHL arenas, so their equipment manager was forced to put all the dry gloves in a shopping cart in order to deliver them to the players on the bench in the middle of the game.