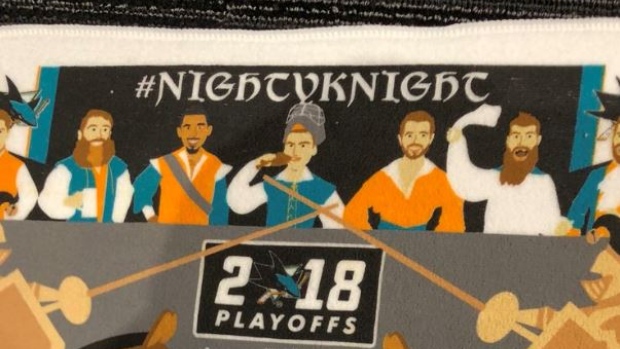 The San Jose Sharks organization went all out when it came to the rally towels for their first round series against the Anaheim Ducks, so it’s no surprise they’re at it again for the team’s second round series with the Vegas Golden Knights.

The Sharks went with a ‘Duck Hunt’ theme during the opening round, so their second round rally towels are going to have more of a Middle Ages feel to them.

This is definitely one of the greatest rally towels we’ve ever seen a team produce, and it’s easily the most creative. As for the Golden Knights’ rally towel for Game 1, here’s a side-by-side comparison of the two and we’ll let you be the judge.

The Sharks rolled with a 'Dunk Hunt' slogan during the first round and now they're rolling with 'Nighty Knight'.

We’re guessing the only hockey fans leaning towards the Vegas rally towels over the Sharks ones are Golden Knights fans, but it doesn’t matter who has the nicer rally towel because at the end of the day it’s all about who performs better throughout the series.