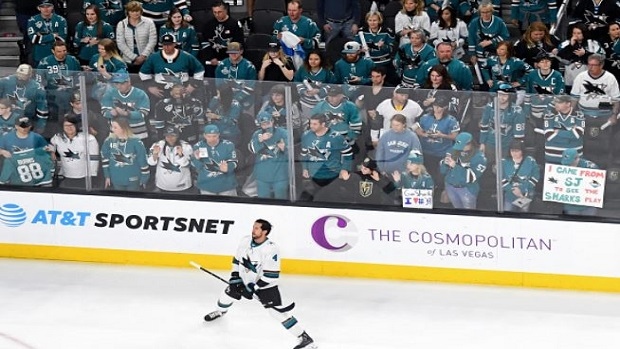 The Las Vegas residents have supported the Golden Knights since day one and their love for the NHL franchise has only grown throughout their historic inaugural season.

Just got of the phone with @chetbuchanan and @985KLUC and we’ve decided to ban the color teal in @CityOfLasVegas as our @GoldenKnights play the @SanJoseSharks in the #NHLPlayoffs #NoTeal #GoKnightsGo!

We doubt any Vegas residents will be rocking Sharks teal over the Golden Knights’ steel grey during their series, but we won’t be surprised if some San Jose residents make the trip over to Nevada for a game or two.

The Las Vegas Metropolitan PD also showed the team some love on Wednesday afternoon as they introduced their newest service dog in the canine unit, Knight.

The newest @LVMPD service dog in the canine unit

The fan base has grown throughout the season and it’s only going to get bigger the further the team goes this season.