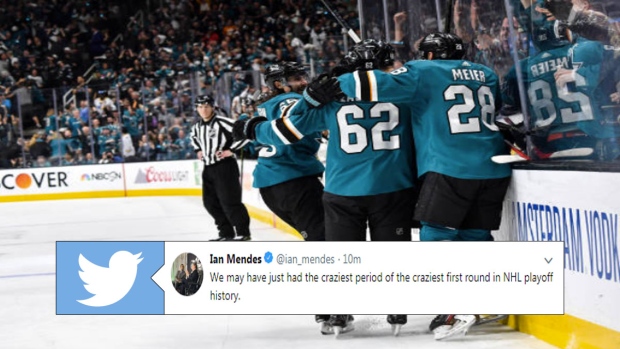 Things were not looking good for the San Jose Sharks as they trailed 3-0 with just under 11 minutes left in the game, but things changed in a hurry. After a scary incident forced Joe Pavelski out of the game, the Sharks were given a five-minute major power play and they did not let their captain down.

The Sharks got their first goal of the game just six seconds into the power play and added another one moments later. Not only did they add a third power play goal before penalty was over, but they added a fourth goal to take their first lead of the night late in the game. Considering it was one of the wildest and craziest comebacks we’ve ever seen, playoffs or regular season, you can bet hockey fans were losing their mind during the process.

If memory serves, not at all the same situation, but I remember the islanders doing this to Detroit on a five minute major to rally late with 4 PPG and eventually win a game in overtime. Help me out @brendanmburke

Props to the Sharks for taking full advantage and absolutely erupting in this Game 7. Hate to see that happen to Pavelski and you don't want to ever see that but that five-minute major was only called because of the end result, right?

What the H-E- double 🏒🏒 is going on in San Jose right now?!?!?! #nhlplayoff #goldenknights #sharks

I’ve seen a lot of things in my life. I don’t know if I’ve ever seen anything like the last 5 mins of San Jose-Vegas.

Meanwhile the Knights-Sharks Game 7 is on crack

Holy S$&! I’ve seen a lot of hockey. I Have NEVER seen or heard of 4 GOALS in one power play! Sharks suddenly somehow up. First lead change in the 7 game series. Wow. Must be insaaane in that building. @SanJoseSharks

Within minutes...VGK fans are in disbelief. The Sharks have scored 4 unanswered goals in 4 minutes @News3LV pic.twitter.com/zZDWIs7Jc6

CAN YOU BELIEVE WHAT YOU JUST SAW.

IT IS A DAMN GOOD DAY TO BE A SHARKS FAN

Unfortunately the Golden Knights managed to force overtime with a late goal, but it still doesn’t take away from how crazy the comeback truly was.