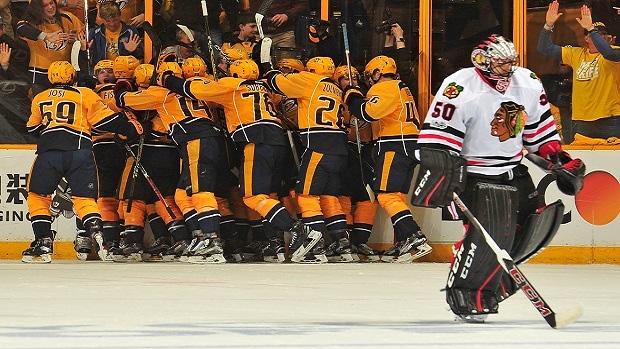 The Nashville Predators shocked the hockey world by pulling off their first sweep in franchise history on Thursday night and they did it in a very impressive way.

The #Predators completed the sweep of the #Blackhawks with a 4-1 win. . They await the winner of Minnesota/St. Louis in the 2nd Round.

Not only was it the team’s first sweep in franchise history, but they knocked off the Western Conference’s No. 1 seed and became the first No. 8 seed to do so.

The @PredsNHL have swept a series for the first time in franchise history and have advanced to the Second Round of the #StanleyCup Playoffs. pic.twitter.com/Gf8t0EkjLg

Game 1 proved the series between the Predators and Blackhawks was going to be a tight one, but no one expected what came next to actually happen after Nashville’s 1-0 victory in Game 1.

The #Preds take home ice away from the #Blackhawks with a shutout in the first game of their series. #StanleyCup

During the course of the series between the Predators and Blackhawks, Chicago held a lead for just 33 minutes and 8 seconds out of total of 256 minutes and 44 seconds of action, which means they were trailing or locked in a tie for just over 75% of the series.

It wasn't Carrie... BUT IT WAS @lukebryan!! #StanleyCup

The most shocking stat from the series has to be the production totals from each side. Patrick Kane has 195 points over the last two seasons, but only managed to score one goal and 2 points in the series, while Artemi Panarin finished with just 1 assist after scoring 61 goals over his first two seasons. At the end of the series, Ryan Johansen and Filip Forsberg combined for more total points (11) than the Blackhawks had as a whole (9). On top of that, Predators defencemen Ryan Ellis, Roman Josi and P.K. Subban combined for more points during the series (10) than Chicago did as a whole (9).

We did it y'all. #Preds win and complete the SWEEP! 🙌🏻🙌🏻 #CHIvsNSH pic.twitter.com/XnBWBhxKjf

You never know who is going to show up for you in the playoffs, but you need your stars to contribute as well if you want to advance past the first round.

The Predators will now take on the Blues or the Wild in the second round.