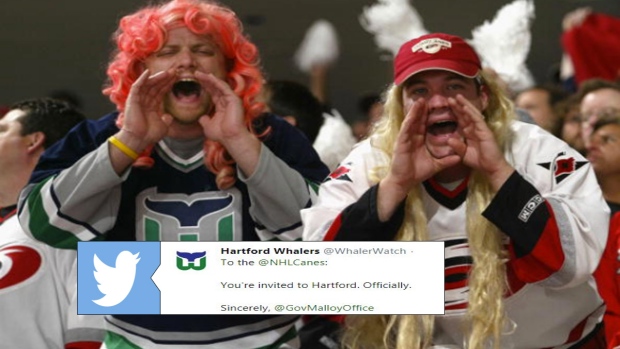 A couple of weeks ago, Carolina Hurricanes owner Thomas Dundon revealed that he plans on bringing back the Hartford Whalers logo next year and wants to set up some sort of Whalers shop for the fans.

Although the NHL has not confirmed or denied whether or not the Hurricanes will be selling Whalers gear next year or wearing any of it on a game night, the Hurricanes added to the hype by adding these shirts to the team store earlier this month.

Cue up Brass Bonanza and stop by The Eye at tonight's game to pick up one of these. pic.twitter.com/zrrikDlfHY

That’s not the only way the Hurricanes have shown some love for the Whalers this season as fans have also noticed that they play the Whalers’ old theme song ‘Brass Bonanza’ during their home games.

Throughout the years, Connecticut Governor Dan Malloy has attempted numerous times to get an NHL franchise back in Hartford and on Friday he took it another step forward by inviting the Hurricanes to host an outdoor game at Pratt & Whitney Stadium at Rentschler Field or play one of their regular home games at the XL Center.

You're invited to Hartford. Officially.

While we don’t expect the Hurricanes to tweet back an answer, it would be awesome if they returned back to Hartford, even if it was for one game.