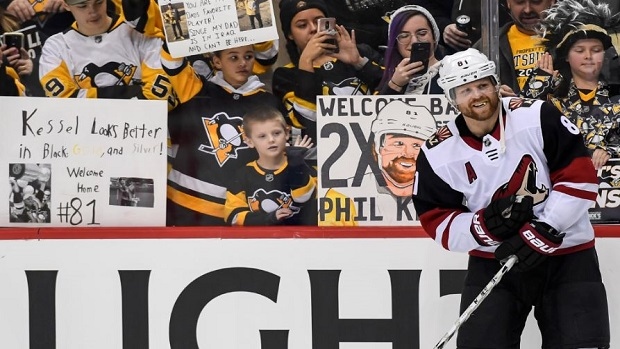 Phil Kessel spent four seasons with the Pittsburgh Penguins and helped the team win back-to-back Stanley Cup titles in 2016 and 2017, but his time with the team came to an end this past summer when he was traded to the Arizona Coyotes.

On Friday night the Coyotes made their lone trip of the season to Pittsburgh and you can bet Penguins fans were excited to see Kessel back in town, even if he was rocking a different jersey.

You can bet they had a video tribute waiting to go for Kessel, too, which they played during a TV timeout, and the former Pen got an extremely warm reception from those in attendance.

Kessel’s tribute video featured everything from his role in the team’s Home Alone video to him getting pranked by Ryan Reaves, and the Coyotes’ winger was all smiles after watching it.

It just 'Phils' right to bring back one of our favorite fan videos as Phil Kessel returns to the city of Pittsburgh. 😆 https://t.co/9z30cTATZp