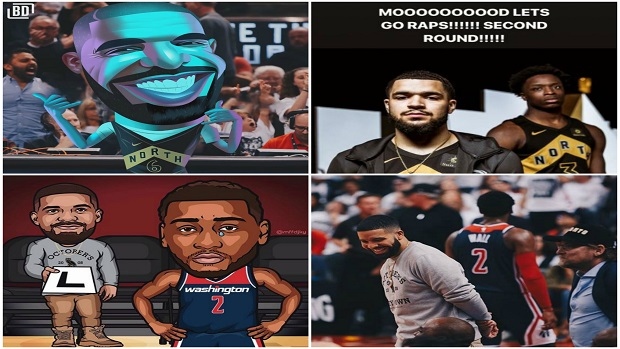 The Toronto Raptors came out flying in their opening round series against the Washington Wizards, but after they dropped Game 3 and Game 4 on the road a lot of basketball fans throughout the league started to doubt the Eastern Conference’s No. 1 seed.

However, after picking up a big win on their home court in Game 5, the Raptors picked up an even bigger win on the road in Game 6 to take the series 4-2 and send the Wizards into an early offseason. While most Raptors fans expected there to be a Game 7 back in Toronto on Sunday night based on the team’s past two games on the road, they were very happy to see their boys close out the series in enemy territory.

The #Raptors are moving on!! #WeTheNorth

The @raptors are moving on like it’s ‘God’s Plan’ 👀

Put that series W in the bag!

Raptors scare off the Wizards to head to the next round!

This was the first time the Raptors have ever won a road playoff game they've trailed at the half. They were 0-23 coming in.

With the victory, the Raptors will take on the winner of the Cleveland Cavaliers and Indiana Pacers series, but will have the home court advantage regardless of who they get matched up against.

You betcha @raptors fans! Here we go to round 2!!!! What a game!! #wethenorth

RAPTORS WIN!! Close out the series with Washington in Game 6 with a 102-92 win! #RTZ #WeTheNorth pic.twitter.com/k3MYl6FA8R

Of course, even after a series-clinching win, the Raptors still had time for the fans who made the trip.