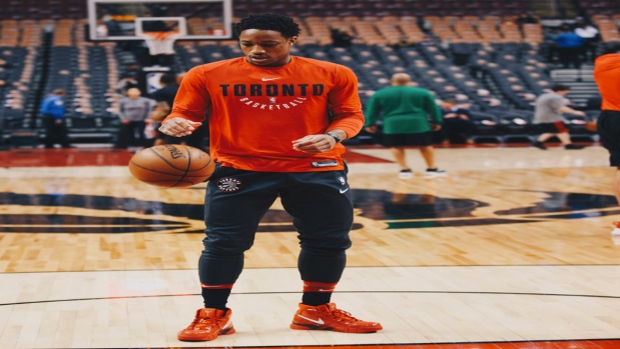 Before the 2017-18 NBA season got underway Kobe Bryant reached out to players he believes have the Memba Mentality instilled in their heads and one of those players happened to be Toronto Raptors guard DeMar DeRozan.

While Bryant’s challenge for DeRozan was to rekindle a friendship from his youth in Compton, DeRozan has done so much more this season as he’s gone from a role model in Toronto to a role model throughout the entire NBA. Aside from making a huge impact away from the court, the 28-year-old has been playing out of his mind all season long and he was rewarded with his own shoe, which he debuted on Wednesday night against the Boston Celtics.

DeRozan made a minor change to his game on Wednesday as he took to the court in his own signature show, the Nike Zoom Kobe 1 Protro “DeMar DeRozan”.

When you take a closer look at the shoes you’ll notice they include some incredible minor details such as DeRozan’s jersey number on the heel and “RAPTORS” written across the lace loop on the tongue.

DeRozan’s new signature shoe will be available to the public starting on April 9, but will only be available exclusively at select Foot Locker House of Hoops in Harlem, Hollywood + Highland and Toronto.